I just sent out the final draft of our Annual Report, which I thought I would be able to do much, much earlier, before I spent TWO-AND-A-HALF HOURS MAKING VANITY COPY-EDITS, and blew my brains out. (I don’t write it, for the record. I just lay it out.)

However, I don’t have anything in particular to say, so I asked the internet (that’s you!) for TOPICS.

Here are some of those.

(NB: I am cheating a little. Since my 60gb died a hideous death, I’ve been using a 4gb nano and rotating music depending on my mood. This means that with the exception of too many Glee songs and a bunch of audiobooks, everything on there right now is pretty respectable. If this was my entire iTunes, you would ALL BE VERY AFRAID. But it’s not, so huzzah! I WIN AGAIN.)

Several people asked my thoughts on The Hobbit, which is unfortunate since I don’t have any.

And no, Alison, I won’t be stalking him. I am not a STALKER. I’m just LUCKY. Sometimes, film sets and/or relevant celebrity boyfriends just APPEAR BEFORE MY EYES, where I charm them with my wacky accent and convince them to let me release their albums, or whatever. It is NOT THE SAME.

Why cats are better

I find dogs intimidating. Not because they’re big or slobbery or require a lot of work, but because they’re NEEDY. I feel guilty just LOOKING at a dog. Every dog alive wants more from me than I feel capable of giving it. (And if I ever get a therapist, that sentence is probably all they’re going to need.) They’re all LOVE ME? PLAY WITH ME? HANG OUT WITH ME? And I’m all YOU ARE SMOTHERING ME HERE, FIDO. PLEASE BACK IT UP.

Cats are better because they make you WORK for it. I like to earn every scrap of affection I get. I also like to pull on the fur between their toes, and otherwise annoy them until they lash out and try to escape, at which point I subdue them and shower them with kisses until I feel their kitty will break. Everyone needs hobbies.

I also like to be intimately acquainted with what’s inside birds, and the feeling of dead mouse between my unsuspecting toes.

Willow is boneless and unresisting to hold from years of my bullying,
but you can still see the loathing in her eyes. I love her. 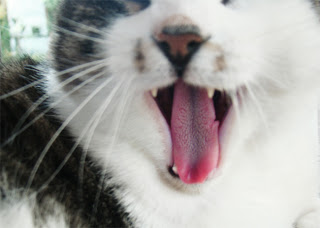 This is Spike. He’s fat and cuddly, and gives me hives.

(Don’t talk to me about the theme names – talk to my former flatmate,
who also named her rabbits Warren and Wesley.)
I look forward to similarly breaking the spirit of FutureCat (ETA December!).

Here’s one I prepared earlier. Trust me, she’s loving it.

Yoga time! Tomorrow I will tackle your SERIOUS TOPICS! It will be VERY EXCITING. Or a HUGE LETDOWN. Either way, I am going to FILL UP YOUR READERS. Or browsers. However you roll, internet, I WILL BE THERE.