I finally woke up in time to catch the early bus this morning. I say finally because I’ve been trying to get to work before nine (or go to the gym before work) for at least a month, and it hasn’t happened once. My plans are rarely my reality. My REALITY mostly involves snoozing my alarm a lot, with a side of snuggly kitty and dicking around with my hair.

So I left the house in time for the 8:09 bus. I was very proud. Only it’s actually an 8:07 bus, and I missed it by inches. It was a nice morning and I couldn’t be bothered going back the way I came to catch the Aro bus, so I decided to walk over to Kelburn.

Ten minutes later, I trotted up to the Kelburn shops and jumped on the first bus to pull up, assuming that all buses heading down the hill head down it via The Terrace. But no! I’d caught the only bus IN HISTORY that goes down Ghuznee St. By the time I got off it, I was CLOSER TO MY HOUSE than I was when I started, and I’d wasted half an hour.

AND THEN IT POURED WITH RAIN.

I arrived at work at exactly the time I always do, but pissed off and soaked to the bone. Lesson learned, universe.

(Also, since I ended up having to walk anyway, I stopped at the supermarket on the way – where I realised, as I got to the counter, that I had to transfer money in order to pay for my food. And then my phone had no service. This morning was AMAZING.)

Jef: Would you dress up as Barbarella and let me film you talking about CSS?
Emily: Yes. Yes I would.

A couple of weeks ago Em, Keith, Jef and I went to Logan Brown for Jef’s 30th. It was my first time there, and it BLEW MY MIND. The food was incredible. We savoured each course, washing delectable taste sensations down with liberal amounts of fine wine, and it was almost 11 before we stumbled out onto Cuba to find cabs home.

Down the street, we passed a cocktail lounge none of us had noticed before. The floor was made of coloured glass that lit up in patterns with the 80s music flowing out the door. “THE FLOOR IS FLASHING!” Jef exclaimed, delighted. “CAN WE GO IN?”

We went in. We were a little tipsy, our stomachs full and our eyes sleepy. We ordered a round of cocktails and took a table. A song from Rocky Horror kicked in, and Emily started to laugh. We looked around.

And, you guys, it was GREAT.

We were there until almost 2am on a school night, drinking cocktails and watching people dance like they meant it. I’ve never seen bar patrons having SO MUCH FUN. Emily had a dance-off with someone who challenged Keith’s honour. Jeffrey exhausted his repertoire of show tunes, and then we had a fight about feminism.

I think we need to start going to gay bars on purpose.

Saturday night was Bec and Clint’s engagement party. As a bridesmaid, I did a speech. And then I did some of this: 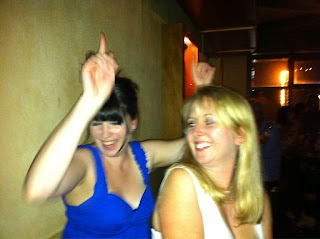